Then and now: 6 Most iconic wedding dresses of all time

31.08.17
From royalty to models and social media stars, we’ve compiled a list of some of the most memorable celebrity bridal looks throughout the years

Wedding dresses have evolved throughout the years—from poofy, figure-hugging and mermaid-cut silhouettes, to long-sleeved, off-shoulder and plunging necklines, we've seen them all. There's nothing like a perfect gown that makes one of the most important days of your life a memorable one. However, with the abundance of colours (if you're steering clear from the traditional route), silhouettes and fabrics available, deciding on a style may not be an easy task. Here, take a look back at some of the most iconic wedding dresses that have graced the aisles. Whether you'd like to stay traditional à la Kate Middleton, or stand out like Bianca Jagger, here are some style inspo to make your say-yes-to-the-dress moment stress-free. Prepare to say your vows—and look amazing doing it.

Held at a Burgenstock Chapel—a local 13th-century Protestant church in Switzerland, Audrey Hepburn's first marriage to actor Mel Ferrer (whom she met in the Broadway play Ondine) in 1954 was a low-key affair. Although their marriage only lasted 14 years, and Audrey went on to marry psychiatrist Andrea Dotti post-divorce, her wedding number remains a classic piece. Designed by Pierre Balmain, the actress walked down the aisle in a high-neck tea-length dress with ball-gown sleeves and complete with elbow-length gloves—exuding classic beauty like no other. She finished her look with a crown of roses in her hair to seal the romantic look. With a high neckline and puffy sleeves being all the rage now, recreating a look from the '50s has never been this trendy. 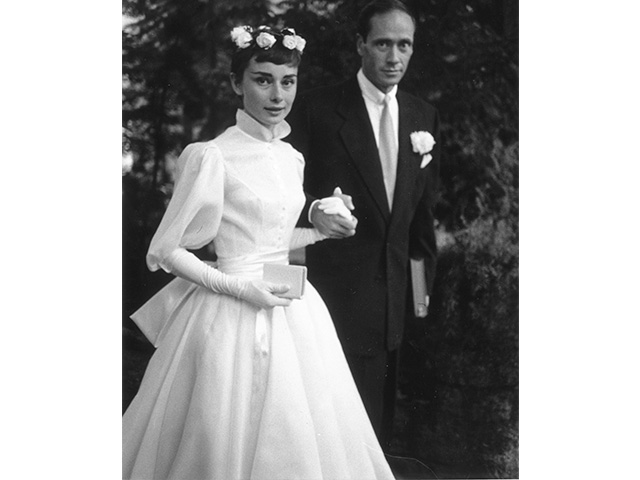 '50s icon Grace Kelly's wedding to the Prince of Monaco, Prince Rainier in 1956 is arguably one of the most lavish weddings of all time—over 20,000 attendees and reporters around the world flew in to cover the event, complete with a cool $2 million dowry. But perhaps the most memorable and talked-about aspect of the wedding is Grace Kelly's remarkable wedding dress—rumoured to have been Kate Middleton's source of inspiration in designing her gown. Designed by entertainment company MGM Studio's costume designer Helen Rose, the dress was made from 25 yards of silk taffeta, antique lace (that was more than a century old) and pearls by 36 seamstresses, and it took six weeks to complete. Aside from the pearl-encrusted veil and headdress, the bride also carried a pearl-encrusted prayer book with her down the aisle. The gown is currently being displayed at the Philadelphia Museum of Art. 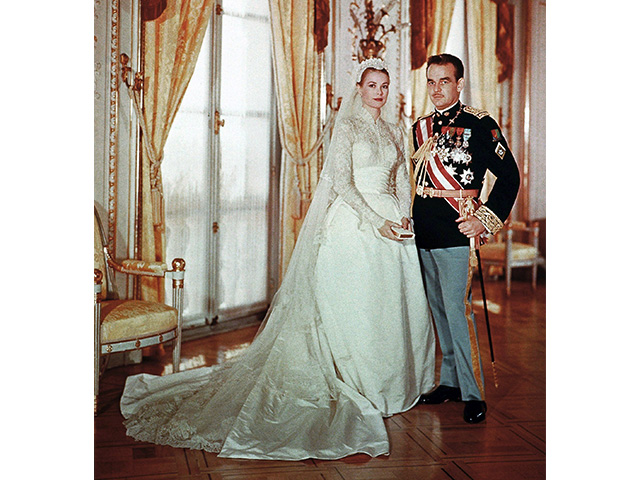 The Rolling Stones' Mick Jagger's first marriage to Nicaraguan Bianca Perez-Mora Macias definitely set the world in a frenzy, but it was Bianca's outfit of choice that was, in our opinion, the highlight of the wedding. On the 12th of May in 1971, Bianca arrived at the Town Hall in St. Tropez, France in a modern wedding suit; not a surprising choice, considering her then-style icon status. Designed by the Yves Saint Laurent head-to-toe, her white tailored skirt-suit was styled with no shirt under, as she was too pregnant to fit into the piece she'd planned on wearing, but somehow, the plunging neckline is what sealed the look. Complete with a wide-brimmed hat instead of the traditional veil or headdress, her bridal outfit is the epitome of rock 'n' roll chic, and decades later, we're still swooning over her bridal get-up.

The royal wedding of the 21st century, the wedding of Kate Middleton and Prince William (aka HRH The Duke and Duchess of Cambridge) reportedly cost almost $34 million, but in the six months leading up to their big day, one of the most discussed topics was none other than what (or who) will the bride be wearing. The news was finally released on the wedding day itself, it was revealed to be Sarah Burton, the creative director at Alexander McQueen who is the designer behind Kate's dress. It has been reported that Sarah had lied to Anna Wintour about designing the royal's dress to keep it fully under wraps. The gown—long-sleeved, low neckline and a full skirt—is made from ivory satin and appliquéd lace bodice, and it features a strapless corset overlaid with lace, striking the right balance between tradition and modernity. Kate finished off her look with a Cartier tiara, loaned to her by the Queen. Following the wedding, the dress has launched a thousand of replicas, and it was the red-hot silhouette of the moment. 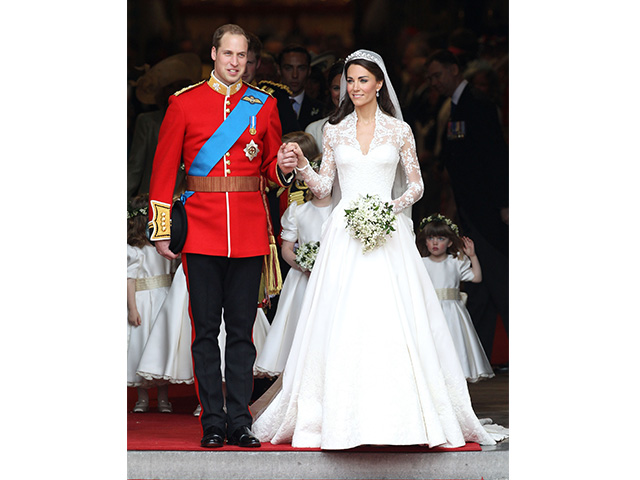 Not one to shy away from risqué looks, Kim Kardashian's (second) wedding dress to Kanye West was a surprisingly graceful piece. The couple flew 200 close friends and family to Versailles for a rehearsal dinner before embarking to Florence for the big day, making it an extravagant wedding weekend. Kim walked down the aisle in a couture Givenchy gown designed by the then-creative director, and good friend Riccardo Tisci, before exchanging vows in front of an over-the-top flower wall. The dress is a long-sleeved lace number with sheer panels at the waist and a cut-out back, pulled together with a simple belt that gives the alluring dress a modern touch. The mermaid silhouette accentuated her curvaceous body perfectly.

It's been more than a year since Miranda Kerr married Snapchat founder Evan Spiegel, but it seems like it was only yesterday that she revealed her custom Dior Haute Couture gown on social media. The Australian model gave Vogue an exclusive look into her final fitting with the French fashion house's artistic director Maria Grazia Chiuri, and acknowledged that her dress was largely inspired by Grace Kelly's gown above. Surprisingly covered up, the long-sleeved number features a high neckline, and intricately appliquéd with lily-of-the-valley embellishment. To top it off (literally), she wore a pearl-encrusted tiara designed by London-based milliner Stephen Jones. Speaking of her style at the moment, which is more refined and polished, Miranda told Vogue, "my greatest sources of inspiration have always been Grace Kelly, Audrey Hepburn, and my grandmother, who at 80 is effortless chic".