As the official watch partner of the Renault Sport Formula One Team, Bell & Ross continues to celebrate the partnership by releasing a new limited edition pair of watches: the BR-X1 RS16 and the BR-X1 RS16 Tourbillon, named after the team's new R.S. 16 race car for the 2016 season.

Introduced at The Grand Prix race week in Shanghai, Bell & Ross' BR-X1 line is the extreme version of the iconic BR01, drawing parallels to Formula One as the ultimate version of a car. Designed to withstand incredible tolerances, the BR-X1 RS16 Skeleton Chronograph and the BR-X1 RS16 Skeleton Chronograph Tourbillon are both armoured and extremely technical, thanks to its innovative 45mm multi-material case that allows it to withstand incredible tolerances. 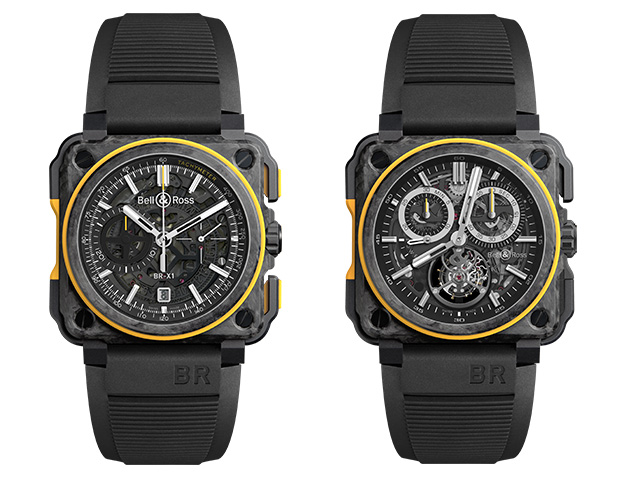 The BRX1s are made with grade 5 titanium and carbone  forgé, a high-tech composite material obtained using a unique patented conversion process that compresses carbon fibers in high temperature in a steel mold. After reworking the carbon fibers and composition of the resin, the result is a non-porous, water-resistant single-unit case with clean edges, in a deep black. The unique marbled appearance of each piece is formed by the random way the carbon fibers are mixed. Made from grey-tinted sapphire crystal and appliqué metal indices with photo-luminescent inserts, the dial forms a clear window through which the movement can be spotted. The faceted, Superluminova-filled hands and appliqué indices offer perfect legibility as well, along with a yellow rubber grip incorporated to the case for better handling especially when wearing gloves. Spot the similar hue that is also Renault Sport's official chromatic on the crown's yellow rubber inserts and rocker push buttons.

Limited to 20 pieces, the BR-X1 RS16 Skeleton Chronograph Tourbillon is fitted with a manual wind Skeleton Tourbillon Mono- Pusher Chronograph, with column wheel movement, and hours and minutes in the center for a traditional display and a 100 hour power reserve indicator at 9 o'clock. It also includes a 30-minute counter at 10 o'clock and a 60-second counter at 2 o'clock for the chronograph functions.

Bell & Ross ventures into Formula One

Bell & Ross ventures into Formula One