Dare to be bold

With the unveiling of the Excalibur Spider Skeleton Double Flying Tourbillon in 2015, Roger Dubuis became the first manufacture to have put together a double flying tourbillon with a skeleton execution. Since then, the Excalibur Spider range has been at the forefront of the brand's bold approach to watchmaking, promising "progressive complications and disruptive materials".

At SIHH earlier this year, Roger Dubuis introduced the Excalibur Spider Pirelli - Double Flying Tourbillon, an exquisite timepiece that features their signature skeleton double flying tourbillon and a strap with inlays made of rubber from the winning tyres at the Monaco Grand Prix. This summer, the brand further spurs its 'Dare to be Rare' concept with three new expressions of the Excalibur Spider. Like the Pirelli partnership, the new timepieces are inspired by performance-oriented industries and supercar supremacy. The Excalibur Spider Double Flying Tourbillon takes on fiery orange accents this season—a nod to the colour coding of supercars. The hand-wound mechanical skeleton Calibre RD105SQ powers this dynamic timepiece, with the twin flying tourbillons at 5 and 7 o'clock rimmed by speedometre-type small second displays. This unique model with a bold racing DNA is limited to production of only 28 pieces. 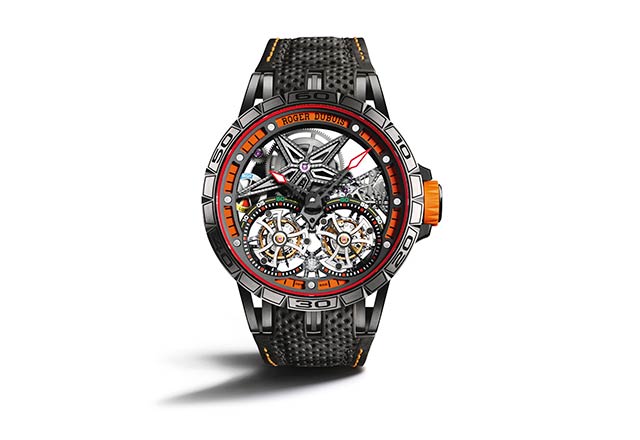 The two new Excalibur Spider Skeleton Automatic models, on the other hand, feature relatively low-key (when it comes to the Excalibur range) aesthetics. Both feature the contrast of pink gold with futuristic titanium and multi-layered carbon. Driven by the automatic skeleton Calibre RD820SQ with micro-rotor, they exude a racing automobile-inspired vibe that is synonymous with the rest of the collection. Both are limited to 88 pieces each. 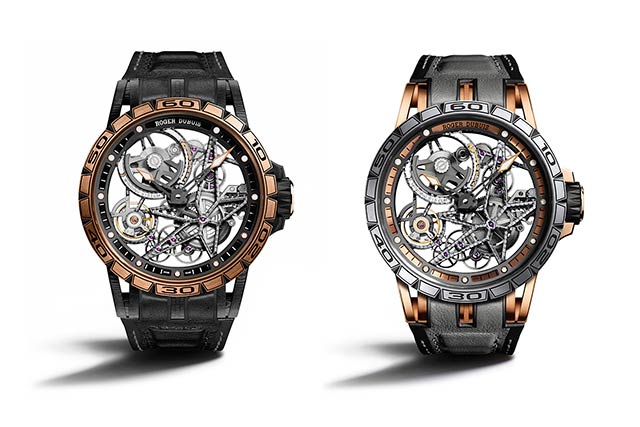